In the 1990’s Mitch Holden appeared on Star Trek Voyager. We are sitting down with him to discuss his time on the show!

Interviewer: How could that happen?

Mitch: I think, you know, I think a friend told me about it, that they were a casting a bunch of nazis. And I think I heard about through a friend. And then I had sent my resume in and then they called me in and and just sized me for  the uniform and, you know, hooking up with a gun. And we worked a few nights on all nights on it, it was all night shoots pretty much. Yeah, but I was kind of like the word went out there looking for, you know, Anglo-Saxon people to do this big scene and big shoot out from Voyager.

Interviewer: So what did you what was it like actually doing that?

Mitch: You know, it’s actually really exciting and the set was pretty, pretty open. I mean, you know, she was around, she had kind of a picnic thing going. This was a grass knoll not far from where we were shooting. So it was kind of cool that, you know, people had blankets out there like a picnic kind of thing to eat in between the work we were doing pretty much up all night.

But yeah, we got a few firearms, which is the first time I ever done that using those World War II Nazi German rifles, you know, pretty authentic. And of course, they had a professional, obviously on set, setting us up with the proper equipment and anything like tha which was quite fun. It was pretty authentic. You know, being inside the ship during the shoot out was was a kick. And it really made a lot of energy, a lot of screaming and running around. So they kept the energy up, especially considering it was all night.  Overall was a really great time, actually, it was like being a kid again, really, you know,

Mitch: Well, I was I played the Nazi guard, I was a sergeant, so I was coming out…then I got shot almost right away out front. So it’s my job to come out and make the shot and get, you know, in terms of telling the troops to start shooting. So I went down pretty quick. Yeah, that’s kind of what it was, really. And then before I got killed, because there was a charging up to the ship, there was one shot after another attack. And you can shoot all that, which was a lot of fun. You know, I was kind of my job to sort of really just play Sergeant, you know, let’s go and get shot, but almost immediately got shot.

Interviewer: How was working on that set, that that futuristic set on the Star Trek What’s different from working in the theater?

Mitch: Well, there were some similarities, especially in the ship itself, because it was built, you know, so it was a pretty good sized set and it was kind of like being on stage really at that point.

Especially the height in terms of the size of it, you mean you’re talking about a bunch of soldiers screaming, running at the ship, you know, in like war face type stuff. So that part was very theatrical in a way. You know, you had to be big and and and really emote, so to speak. I guess.

How it was different is we got to do it over and over again, you know, until we got it right. And there was a lot of intricacy within the ship itself, you know, being behind something and barricading yourself or shooting in a certain place right at the camera, that kind of thing, that we do that over and over again, which is, of course, the theory that you got the one shot, you know, but it was a good mixture that it’s such a great actors as well or after to the level of the actor’s great as well.

You know, they took it very seriously. And that reminded me of theater really in a way that they took it, took the fans seriously, took the show seriously, and and we had a good time doing it. It was kind of pretty kind of a rare combination, you know, that work.

Mitch Holden: Well, I think it’s because it’s such a life and death situation, you know, you’ve got there in  your inner life or its not going to work, nobody’s going to believe you. So in that sense, you’ve got to put yourself in that place at that time that, you know, you could be killed in any second and and you’re trying to kill. So there’s this place you have to go. But not too many people get to go to where you know you’re going to kill someone or they’re going to kill you, you know, so that takes time. You really have to focus in on something if you’re going to do it right.

You know, you have to go there in your mind and prepare yourself. And where where was he coming from before he started raiding the ship and you know, where they camped, how long they’ve been out, all the things that lead up to that anxiety, you going to feel going war, you know, so preparation is the most important part, obviously. Otherwise, you just you just playing around, you know, you’re not really doing it.

Interviewer:  Anything else you’d like to say about your Star Trek experience?

Mitch: You know, I think just the idea of how if you deal with people, you know, doing that stuff at that level, they’re going to be really good at it. So be prepared, you know, I guess it’s probably. We keep talking about that. But you’ve got to be ready to work at that level, too, when you step on the set, you know, and make sure you match them.

There’s nothing worse than not going there with just sort of I’m going to play around with an attitude. You they don’t work like that. I mean, they’re having fun, too, but they’re also professionals, you know, an artist. So I would say it’s probably the best thing I took away from all that, you know.

Interviewer: That’s awesome, I appreciate your time talking about this!

Mitch Holden is available for acting coaching as well as on screen work. Visit his site at https://creativeactingcoach.com 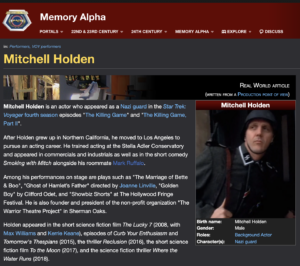 Click Here for an Interview with Mitch Holden on his time on Star Trek: Voyager